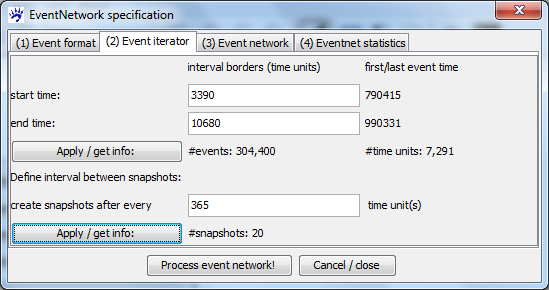 Then you have to choose the time points when a network snapshot is to be created by specifying the delay between snapshots. You can see in the dialog that the event sequence spans more than 2,700 time units (i.e., days with the current settings) which is almost 20 years. The number of snapshots must be small (some 10 or 20 snapshots are ok), since they are all opened in a new tab in visone. When we want to create a snapshot once a year we specify create snapshots after every 365 time unit(s). (The number of snapshots is then 20.) visone always creates one snapshot at the end of the event sequence - even if the waiting time is less than the specified number.