A network collection is a set or sequence of several networks that belong together, e.g., by building a longitudinal network (i.e., a network observed at several moments in time). Network collections can be jointly analyzed and visualized (e.g., computing the same centrality index or applying the same layout algorithm on all open networks). A visone network collection that represents longitudinal data can be visualized by a dynamic layout algorithm showing the evolution of the network over time and it can be analyzed with the RSiena software for modeling the co-evolution of networks and behavior. This trail guides you through these application scenarios in an example-driven way. To follow the steps illustrated here, download the file Newfrat_top3.zip, linked from and described in the page Newcomb Fraternity (data), and extract (unzip) its content (consisting of the files newfrat01.graphml to newfrat15.graphml) to your hard disk. This trail assumes that you have basic knowledge about working with visone as it is illustrated in the other three basic trails.

In visone, several networks can be open at the same time - each in its own network tab. In general, you can load networks into visone by (1) starting and editing a new empty network, (2) by opening a network from a local file, or (3) by creating a random network. To load the set of networks that serves as illustrating example in this trail, click on the menu file, open, navigate in the file browser to the directory where you've put the files newfrat01.graphml to newfrat15.graphml (see above) and select all of them before you click the ok button. (Selection of these files can be done in different ways, for instance, by keeping the Control-key pushed while successively selecting the files with a mouse left-click or by clicking on one of the files and then typing Control-a to select all files in the current directory.)

Network analysis and visualization algorithms can be applied to all open networks simultaneously. For instance, to compute the indegree of nodes in all 15 networks that are currently open in visone go to the analysis tab, make the appropriate choices to compute indegree (for information on this see the trail on visualization and analysis), and select open networks in the apply to drop-down menu at the bottom of the analysis tab before pushing the analyze! button. Each of the networks has now an attribute called indegree (or whatever name you've chosen) whose values are equal to the nodes' indegrees at the respective time points.

Applying a visualization algorithm simultaneously to all open networks works accordingly. For sake of example, map the newly computed indegree to the node size (more information about how to map attributes to graphics can be found in the trail on visualization and analysis). 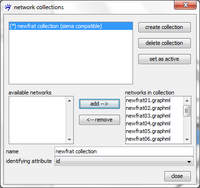 The analysis and visualization algorithms illustrated above processed the networks separately, one at a time. So far, a node in one network has not been identified with any node in another network. To do this you have to tell visone which attribute is the one that identifies nodes by creating a network collection with the collection manager. You have to create a network collection before you compute a dynamic layout or before you model and analyze the network evolution with the RSiena interface (these two application tasks are illustrated below in this trail).

icon in visone's toolbar. In the collection manager push on the create collection button, select networks offered in the area labeled available networks and add them to the current collection by pushing the add

button. The order in which the networks appear in the area labeled networks in collection matters since it defines the ordering of networks over time: the network in the first line corresponds to the first observation time point, that in the second line has been collected next, and so on. In our particular example, the integers 01 to 15 in the network names suggest this ordering: networks with higher numbers have been collected later. (Just for the sake of example, if network newfrat12.graphml were the one collected at the last observation time you could move it to the end of the list by removing it and adding it again. It will take a few more steps to correct this and put it back on position 12.) The important option that you have to set is the identifying attribute being the name of the attribute that identifies nodes over different time points. Note that in the current example you are only offered to choose id as the identifying attribute (note that the attribute indegree is not an option for the identifying attribute since its values are not unique, i.e., several nodes have the same indegrees). While you can create a network collection even if some nodes are not present at all time points, a network collection is marked as being siena compatible if all nodes are present at all times. If a network collection is not siena compatible it cannot be modeled with RSiena but you can nevertheless compute a dynamic layout. More than one collection can be created and you can switch between them with the set as active button in the collection manager. 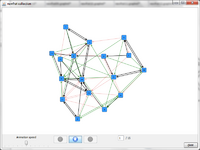 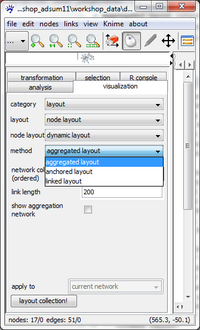