The Knecht Classroom Data were collected by Andrea Knecht (see Knecht A. (2008). Friendship Selection and Friends' Influence. Dynamics of Networks and Actor Attributes in Early Adolescence. PhD dissertation, University of Utrecht.). The full data set contains a large number of classrooms. We use the following one, which is described and available on the the Siena webpage, in the tutorial on using RSiena from within visone.

This data is about a friendship network in a Dutch school class. The data were collected between September 2003 and June 2004 by Andrea Knecht, supervised by Chris Baerveldt, at the Department of Sociology of the University of Utrecht (NL). The entire study is reported in the above-mentioned dissertation. The project was funded by the Netherlands Organisation for Scientific Research NWO, grant 401-01-554.

The 26 students were followed over their first year at secondary school during which friendship networks as well as other data were assessed at four time points at intervals of three months. There were 17 girls and 9 boys in the class, aged 11-13 at the beginning of the school year. Network data were assessed by asking students to indicate up to twelve classmates which they considered good friends. 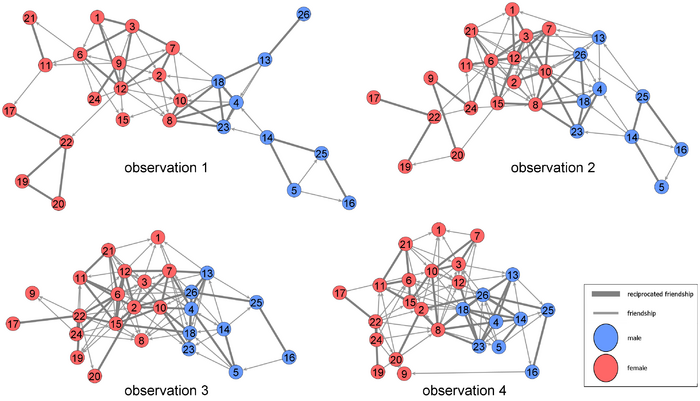 all observations of the classroom friendship network

The data that we provide for download below are taken from the the Siena webpage (see data sets) and slightly modified (in terms of missings).

They are available in two formats (right-click and choose save link as to download):